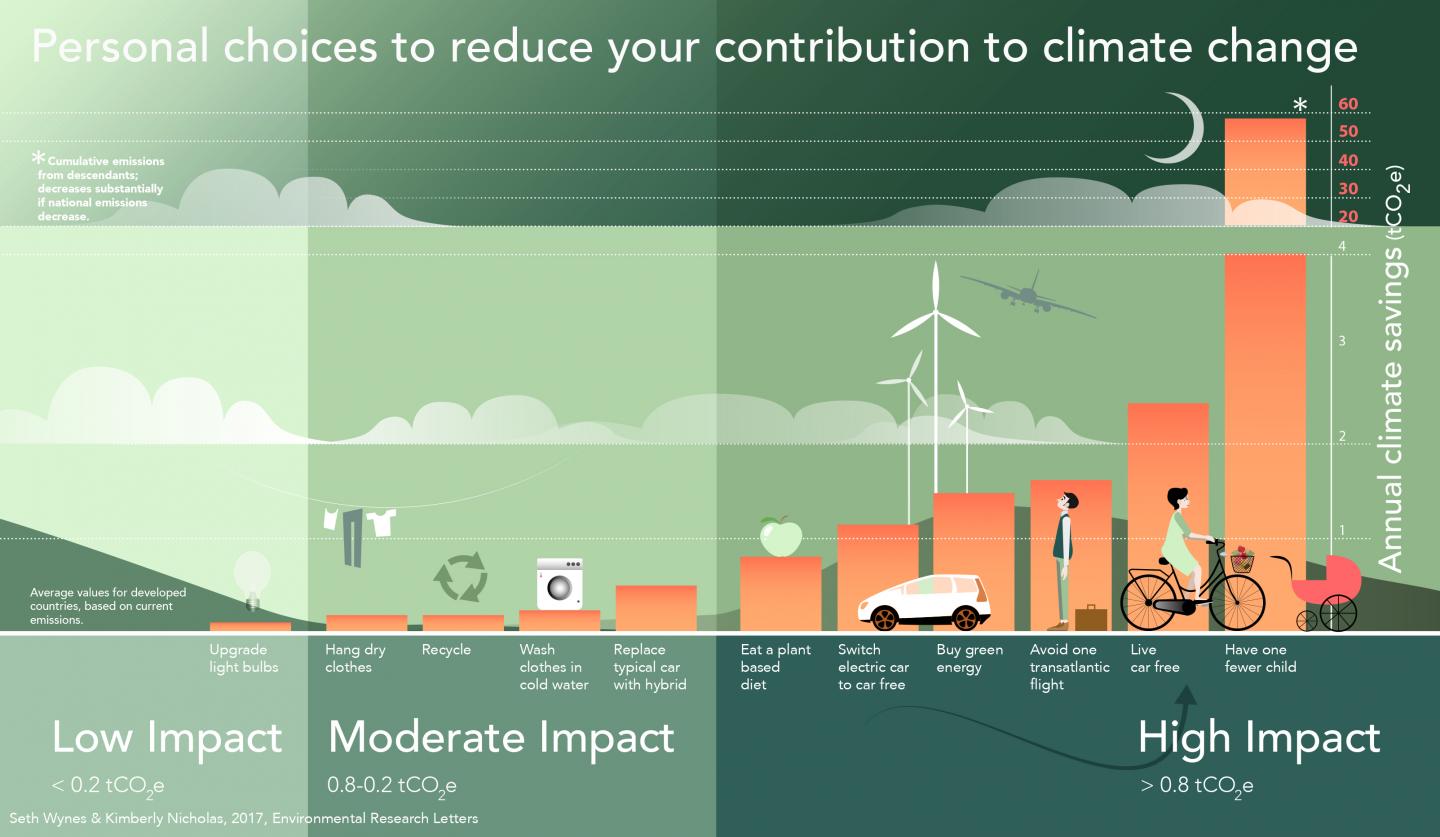 A recent study from Lund University in Sweden revealed there are four actions that can significantly decrease an individual’s contribution of carbon footprint.

“These actions, therefore, have much greater potential to reduce emissions than commonly promoted strategies like comprehensive recycling (which is 4 times less effective than a plant-based diet) or changing household light bulbs (8 times less effective),” principal author of the study Seth Wynes said in a statement.

According to the researchers, if only these four actions are being considered by governments this would more likely reduce greenhouse gas emission beneath the levels needed to prevent 2°C of climate warming.

However, governments seem to only focus on the wrong side, which is advocating incremental changes.

“There are so many factors that affect the climate impact of personal choices, but bringing all these studies side-by-side gives us confidence we’ve identified actions that make a big difference. Those of us who want to step forward on climate need to know how our actions can have the greatest possible impact. This research is about helping people make more informed choices.

“We found there are four actions that could result in substantial decreases in an individual’s carbon footprint: eating a plant-based diet, avoiding air travel, living car free, and having smaller families. For example, living car-free saves about 2.4 tonnes of CO2 equivalent per year, while eating a plant-based diet saves 0.8 tonnes of CO2 equivalent a year,” Wynes added.

“We recognize these are deeply personal choices. But we can’t ignore the climate effect our lifestyle actually has. Personally, I’ve found it really positive to make many of these changes. It’s especially important for young people establishing lifelong patterns to be aware which choices have the biggest impact. We hope this information sparks discussion and empowers individuals,” co-author of the study Kimberly Nicholas stressed.

Interestingly, a separate study that came out in the Climactic Change journal seems to validate the suggested action of avoiding air travel as the impact of global warming has unequivocally disturbed the aviation industry, too.

In a new study from Columbia University, researchers found that during the hottest parts of the day, 10% to 30% of fully loaded planes may need to remove part of its fuel and cargo as well as lessen its passengers, because if not, they need to wait for cooler hours to be permitted to fly.

“As the world gets more connected and aviation grows, there may be substantial potential for cascading effects, economic and otherwise. This points to the unexplored risks of changing climate on aviation,“ climatologist Radley Horton and co-author of the study said in a statement.

Research also showed that as air warms, it also spreads out and the density lessens. In thinner air, plane wings produce less lift as the plane moves along a runway.

Therefore, full-packed plane may not be capable of taking off safely if the temperature rises, depending on the aircraft model, runway length, and several other factors.

“Our results suggest that weight restriction may impose a non-trivial cost on airline and impact aviation operations around the world,” principal author of the study, Ethan Coffel, said in a statement.

Such study projected the consequences on a broad range of jets on these airports, including 15 other busiest airports in South Asia, China, Middle East, Europe, and United States.

Just this June, American Airlines (AA) cancelled over 40 flights in Phoenix, Arizona as daytime high reached about 120 degrees, making it too hot for take-off of small regional jets.

According to AA spokesman Ross Feinstein in a previous news report, smaller regional jets are not allowed to operate anymore once the temperature climbs at 44.7 °C.

Globally, the average temperatures are expected to grow as much as another 3 °C (5.4 degrees F) by the year 2100.

In fact, Coffel and Horton found that heat waves are possibly becoming more ubiquitous with its yearly maximum daily temperatures at airports across the world believed to go up to 4 to 8 °C (7.2 to 1.44 F) by 2080. These heat waves may contribute more problems in the future.

Airports such as New York’s JFK, London Heathrow and Paris’s Charles de Gaulle are less affected because they have long runways and are located in temperate regions.

On the other hand, airports with shorter runways and aircrafts with lower temperature tolerances have tendency to suffer more from global warming.

Like the short runways of LaGuardia, a Boeing 737-800 may need to reduce offload weight half the time during hottest days.

Far worse in cities like Dubai in the United Arab Emirates where the runways are long, yet its temperatures are extremely high.

“The sooner climate can be incorporated into mid- and long-range plans, the more effective adaptation efforts can be.” Coffel ended his statement.

The effects of climate change in aviation can be lessened with new engine, body designs, or expanded runways for aircrafts, according to Horton.

However, the adjustment would come at a cost since aircrafts are highly built for proficiency already.

Likewise, the expanded runways in crowded urban cities such New York are not an option as of now.

According to the authors’ estimation if only the world would somehow reduce carbon emissions soon, reductions may improve as little as 0.5%, or else fuel capacities and payload weights have to be lowered by as much as 4% during the hottest days for selected aircrafts.

Nowadays, studies are mostly focused on how aviation affects global warming, such as an aircraft composed of about 2% of global greenhouse-gas emissions.

Another major concern of the researchers is the rising sea levels that already threaten flooding in some big airports.

The study of Coffel and Horton is the only global research so far that focuses on the global warming effects in the aviation industry.

How has the pandemic changed your life? A biker from Manila shares his personal take in this quick, lovely narrative. Link in bio.