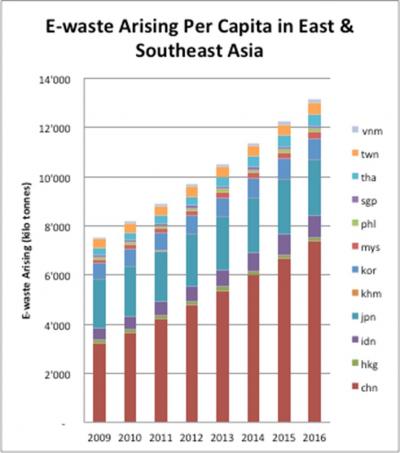 The United Nations’ (UN) think tank reported a nearly two-thirds spike in the electronics waste (e-waste) quantity in the Southeast and East Asia between the years 2010 and 2015, indicating a speedy growth in e-waste generation in both per capita measures and total volume.

The United Nations University’s pioneering research, Regional E-waste Monitor: East and Southeast Asia, showed that the average e-waste increase in 12 countries and areas examined was 63% during the five years, totaling to 12.3 million tons, which is a about 2.4 times the weight of the Great Pyramid of Giza.

In China alone, the data revealed that it has more than doubled its e-waste generation to 6.7 million tons in the years studied, which is up by 107 percent.

Through the use of the estimation methodology of said university, their research learned of the growing e-waste quantities overtaking population growth.

The average generation of e-waste per capita in the said region was around 10 kg last year.

It also discovered big differences on the per capita sales between nations. The countries with the lowest generation of e-waste per capita last year were Cambodia at 1.10 kg, Vietnam at 1.34 kg, and Philippines at 1.35 kg.

The Japanese Ministry of Environment funded the UN report, which is a distinctive summary of the statuses of regional e-waste.

It also allowed direct comparisons to assist in the development of policies and systems to manage e-waste basing on experiences of other countries.

“For many countries that already lack infrastructure for environmentally sound e-waste management, the increasing volumes are a cause for concern,” Ruediger Kuehr, co-author of the report, said in a statement. “Increasing the burden on existing waste collection and treatment systems results in flows towards environmentally unsound recycling and disposal.”

The UN report identified four main trends seen responsible for the spike in e-waste volumes: more gadgets brought about by technological innovation; more consumers in the growing populations of the said region and the rise of middle classes who can afford new gadgets; decreasing usage time for products going obsolete thus the need to fast replacements; and imports of electronic and electrical equipment offer more availability of both new and second-hand products.

Moreover, it warned of the illegal and improper dumping of e-waste that is widespread in most of the studied countries, regardless of national legislation on e-waste.

Many are frequently guilty of dumping e-waste illegally, specifically of the so-called “open dumping,” which involves non-functional parts or residues being dismantled and treatment operations discharged into the environment.

Regional studies, however, cited the main reasons for such actions: lack of awareness, lack of incentives, lack of convenience, absence of suitable sites, and weak law enforcement and governance.

Open burning, which is also one of the common practices of informal recyclers for the segregation of organic or inorganic compounds, can bring about severe and lasting harmful effects on public health and environment, the report said.

Informal recycling or backyard recycling is likewise a test for most of the developing counties in the said region, considering the big and expanding business of running illegal and unlicensed practices from one’s backyard.

Problem is, these practices are not only dangerous but also ineffective because of the inability to extract the complete value of the products processed.

Taiwain, Japan, and South Korea have adopted and enforced legislations on e-waste management since the late 1990s, while Vietnam, Malaysia, and Philippines have established e-waste legislation recently, thus still in a transition phase.

Indonesia, Thailand, and Cambodia would still need to create legislation for managing their e-waste, but there’s an informal sector in these countries that has an established network for collecting, importing, and recycling of end-of-life goods.

To read the complete UN report on e-waste in Southeast and East Asia, click here.