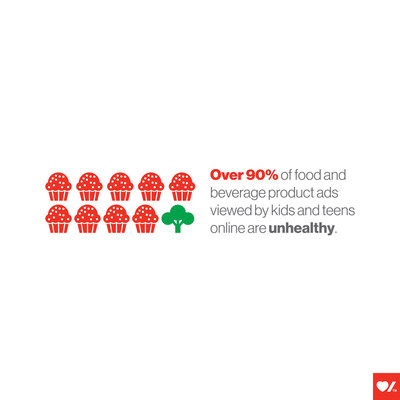 A charitable organization in Canada found that the children and the youth are bombarded daily with advertisements of unhealthy products that influence their choices on food and beverages, eventually leading to damaging health effects and conflicts at home.

Heart & Stroke, a foundation that’s 60-years-long been dedicated to fighting stroke and heart disease, revealed this in its 2017 Report on the Health of Canadians—said to be the first research of such kind in the country.

“Heart & Stroke is committed to giving kids the best start for a long, healthy life,” Diego Marchese said in a statement.

Marchese, who is the Interim CEO and Executive Vice President of Heart & Stroke, added: “Pushing for legislation to restrict food and beverage marketing to children and youth may seem like a bold measure, but given experts’ prediction that today’s children may be the first generation to have poorer health and shorter lifespans than their parents, we need to be bold.”

The report examined how this unrestricted marketing on food and beverage directed at Canadian kids negatively affects choices and preferences, as well as their health and family relationships.

It surveyed Canadians and commissioned one of the leading researchers in Canada to study the volume of digital advertising on food and beverage to Canadian kids and teenagers, to evaluate product quality, and to look into how well the industry regulates itself.

“I could not get over the numbers, there are many ads on TV directed at kids and it’s even higher for teens, but there are only so many spots available, there is a limit. On the Internet there are absolutely no limits,” Dr. Monique Potvin Kent, expert on children’s nutrition and food and beverage marketing, said in a statement. “The level of food and beverage marketing online is very high and almost all products advertised are unhealthy.”

Her research discovered that more than 90% of food and drink ads seen by children and teenagers online are aimed at unhealthy products.

Children between two and 11 years old view 25 million of such ads annually on their favorite top 10 websites.

For product categories most often advertised on kid’s favorite sites, these are cereal, ice cream, cookies, cakes, and restaurants.

It’s high time for such “marketing storm” to end, the foundation said.

Among the most effective approaches to protecting children and support their parents is the implementation of strong restrictions on the commercial marketing of food and drinks to kids and teenagers, which is why the foundation has called on the government to pass regulation without any delay.

According to Heart & Stroke, unhealthy eating is said to be a primary risk for death in the country, which begins in childhood and developing through life.

The total number of Canadian obese kids has tripled since 1979, with nearly one out of three children regarded as obese or overweight.

The volume of marketing the kids are exposed to influences the statistics on obesity, which isn’t surprising at all to think that majority of the marketed products for kids are considered unhealthy.

The research survey also found that 72% think this industry directly promotes its products to kids and that 78% think these products are not healthy.

“We have seen a transition in the last few decades,” Dr. Norm Campbell, a Heart & Stroke CIHR Chair in Hypertension, said. “For the first time we have kids who have spent their whole lives eating unhealthy diets high in processed foods.”

Additionally, 71% of Canadians deemed that because this industry spends a lot of money on advertising to children, it poses an unfair advantage on parents in terms of influencing the kids in their eating and drinking routines.

“The effect on families is often corrosive or disruptive,” said Childhood Obesity Foundation chair, Dr. Tom Warshawski. “Parents love their kids and want them to flourish but marketing persuades kids to want junk food and drinks. Part of the goal of that persuasion is setting up a conflict between kids and parents. Kids agitate for these products.”

To read the complete Heart & Stroke 2017 report, check out heartandstroke.ca/heartreport.

0 comments on “Kids are not OK: Food and beverage industry marketing them to death”