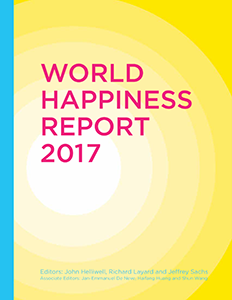 If you’re down and out, there’s no place you’d rather be right now than Norway—currently hailed as the happiest place in the world, topping off powerful nations such as the United States.

Following it were Denmark, Iceland, and Switzerland, according to the World Happiness Report 2017.

Considering that these countries have very close averages, their rankings can change every year.

“It is sometimes said that Norway achieves and maintains its high happiness not because of its oil wealth, but in spite of it,” the World Happiness Report stated.

Norway has chosen to slowly produce its oil and to invest its proceeds for the future instead of spending such in the present, insulating itself “from the boom and bust cycle of many other resource-rich economies,” said the report.

It added that successful implementation of this “requires high levels of mutual trust, shared purpose, generosity and good governance, all factors that help to keep Norway and other top countries where they are in the happiness rankings.”

Finland was in 5th place, trailed by Netherlands, Canada, and New Zealand.

Tied on the 9th place were Sweden and Australia, with same score to three decimals in 2014 to 2016.

These countries likewise have high values of the following important variables for the happiness index: freedom, generosity, having someone to depend on in troubled times, health life expectancy, income, and trust.

Trust was weighed in on the absence of corruption in both government and business.

The current report highlights the relevance of the social foundations of happiness, which can be seen through a comparison of life experiences among the highest and lowest 10 countries in the current’s happiness rankings.

Eighty percent of the difference of happiness around the world happens within countries.

In wealthier countries, their within-country differences aren’t primarily explained by the inequality in income, rather by differences in personal relationships, physical health, and mental health.

The report also identified that mental illness is the “biggest single source of misery.”

In poorer nations, income differences, however, matter more. Yet still another main source of misery for them is also mental illness.

Another major factor that affects one’s happiness is work, with unemployment causing a big fall in happiness.

For those with work, the quality of one’s work can likewise cause major differences in happiness.

Unfortunately, America’s happiness has declined over the years. It used to rank 3rd in 2007 among OECD countries, later ranking 14th  in the report.

Reasons for the decline are increased corruption and deteriorating social support, the World Happiness report said.

The report was commissioned to the Sustainable Development Solutions Network by the United Nations.