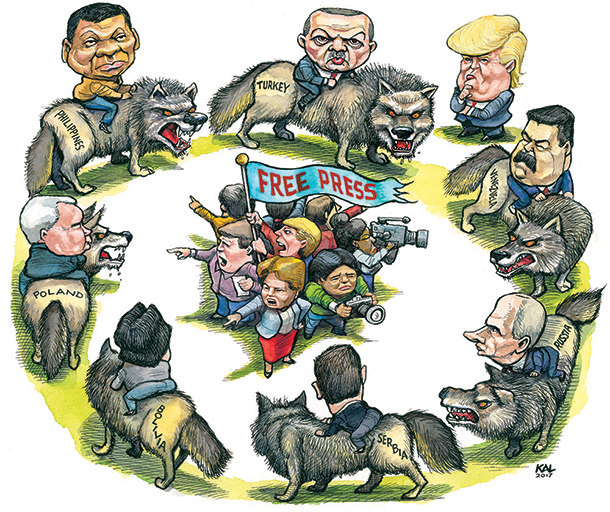 Merely 13 percent of the global population revels on Free Press, which an independent watchdog Freedom House described as a media atmosphere where there’s robust political news coverage, guaranteed safety of journalists, minimal state intrusion in media dealings, and the absence of difficult economic or legal pressures to the press.

The watchdog further revealed that world press freedom reached its lowest point ever in 2016, in the past 13 years, due to factors such as unprecedented threats against journalists and media companies in major democracies, increased crackdowns by authoritarian countries, as well as moves by China and Russia to intensify their influence outside their borders.

“Political leaders and other partisan forces in many democracies—including the United States, Poland, the Philippines, and South Africa—attacked the credibility of independent media and fact-based journalism, rejecting the traditional watchdog role of the press in free societies,” Jennifer Dunham, director of research for the annual report, said in a statement.

“When politicians lambaste the media, it encourages their counterparts abroad to do the same. Vitriolic attacks on individual journalists and news outlets in the United States undermine our democracy’s status as a model of press freedom,” he added.

The annual report pointed out that politicians in democratic nations started or increased their efforts in shaping news coverage by “delegitimizing media outlets, exerting political influence over public broadcasters, and raising the profile of friendly private outlets.”

The watchdog said that despotic leaders worsened the situation by trying to influence media in democratic nations.

On the other hand, public officials in authoritarian states such as Venezuela, Turkey, and Ethiopia utilized social and political unrest as an excuse to heightened crackdowns on opposition-oriented or independent media outlets.

Those in the Middle East, sub-Saharan Africa, and Asia, meanwhile, either prolonged their restrictive rulings to online speech or just took down telecommunications services on critical situations, such as during rallies or before elections.

It likewise mentioned some countries to watch out for as they move toward significant changes in press freedom.

In Australia, the forceful leak investigations of those in authority, such as the use of telecommunications regulation to collect metadata of journalists without a warrant, might alarm the robust media landscape in the country.

Philippines President Rodrigo Duterte’s supporters and subordinates might act on his violent threats against journalists who are critical to abuses connected to the administration’s war on drugs, the report warned.

In the United States, it is unclear if President Donald Trump’s condemnation of the media would bring about systematic restrictions against journalists.

The report also said that the possible media crackdown in Cambodia prior to the upcoming elections with Prime Minister Hun Sen’s willpower to prevent repeating the 2013 general elections wherein the opposition achieved substantial gains.

The prevailing National League for Democracy in Myanmar, meanwhile, will be pressured to enhance its support toward press freedom following the supervision of delayed legislative reforms, a growth in libel cases, and efforts to restrain reporting on human rights abuses and corruption in 2016.

Notable positive developments, however, were seen in Argentina, Afghanistan, Sri Lanka, and Panama where governments tried to develop the media atmosphere affected by their predecessors’ ruling. Regardless, they have yet to see the practical effects of such improvements.

0 comments on “Freedom of the Press 2017 Report: Deteriorating press freedom around the globe”