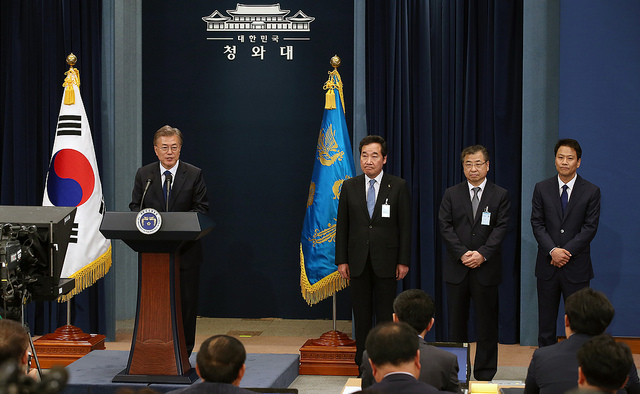 Three days after being sworn into office, South Korea’s new president Moon Jae-in, a former opposition leader, vowed to be a different president, saying he would “set a new example and make utmost efforts in becoming a leader who would be viewed as a success by the public and by history.”

Garnering more than 40% of the votes, Moon’s landslide victory in the 15-candidate race came after the incumbent Park Geun-hye was impeached and dismissed on grounds of corruption.

“I will become a clean president. I take office empty-handed, and I will leave office the same way,” he said.

Moon’s stance on the presidency could be taken from his humble beginnings as a child living in poverty, but excelled in school and landed a spot in a university to study law at a time when South Korea was under the dictatorship of the ousted president’s father, Park Chung-hee.

As a student, he took a prominent role in protesting against the suspension of civil and political rights.

He was arrested and expelled from the university but was later allowed to return and complete his studies, and ultimately earning a law degree.

Speaking before the South Korean people after being sworn in at midday of May 10, Moon pledged to work with opponents and to change the culture of the presidential office.

Holding regular press briefings on key issues was one change, he said.