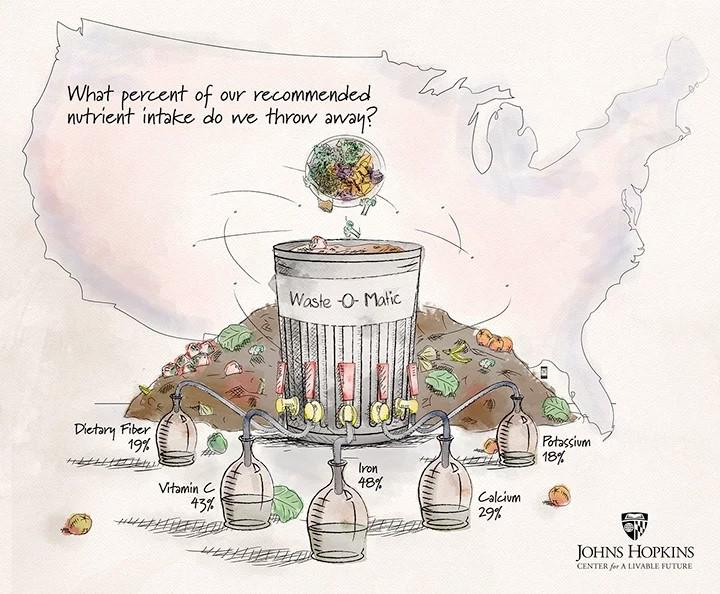 A significant amount of nutrients goes to waste in discarded food, which could otherwise help many Americans meet their daily requirements.

A previous research has estimated the calorific value of food thrown away in the United States, but little is known about the nutritional value that is lost in food waste.

This new study, Wasted Food, Wasted Nutrients: Nutrient Loss from Wasted Food in the United States and Comparison to Gaps in Dietary Intake in the Journal of the Academy of Nutrition and Dietetics, found that food thrown away contains large amounts vitamin D, fiber, and potassium, which are key nutrients that could help Americans meet their daily recommended intake.

According to the study, in 2014, 14% of American households were food insecure and 5% experienced a shortage of resources that forced them to skip meals or reduce their food intake.

As a result, Americans lack certain nutrients including dietary fiber, calcium, potassium, and vitamins A, C, D, and E. As this happens, Americans continue to waste food at an alarming rate throughout the food supply chains.

For example, 31-40% of food supply is wasted before it reaches the consumers.

According to the study, perishable foods such as fruits and vegetables are lost at particularly high rates, leading to exceptional losses of under-consumed nutrients.

The study calculated the nutritional value of retail and consumer level waste of 213 commodities in the USDA Loss-Adjusted Food Availability data series for 27 nutrients in 2012 using data from the National Nutrient Database for Standard Reference.

Adult women in 2012 under-consumed dietary fiber by 8.9 g per day, and the amount of wasted fiber is equivalent to this gap for 206.6 million adult women.

The first study to show how much nutrients, including those under-consumed, are wasted due to food discarded at the retail and consumer levels of the US food supply, it could help motivate related investments and likewise support the case for engaging registered dietitian nutritionist with these efforts.

The estimates can likewise serve as a baseline for monitoring the impact of these interventions.

“Although only a portion of discarded food can realistically be made available for human consumption, efforts to redistribute surplus foods where appropriate and prevent food waste in the first place could increase the availability of nutrients for Americans, while saving money and natural resources,” the authors said. “The U.S. has established a target of halving food loss and waste by 2030. This research supports the case for action and for registered dietitian nutritionists to bring their expertise to the effort.”