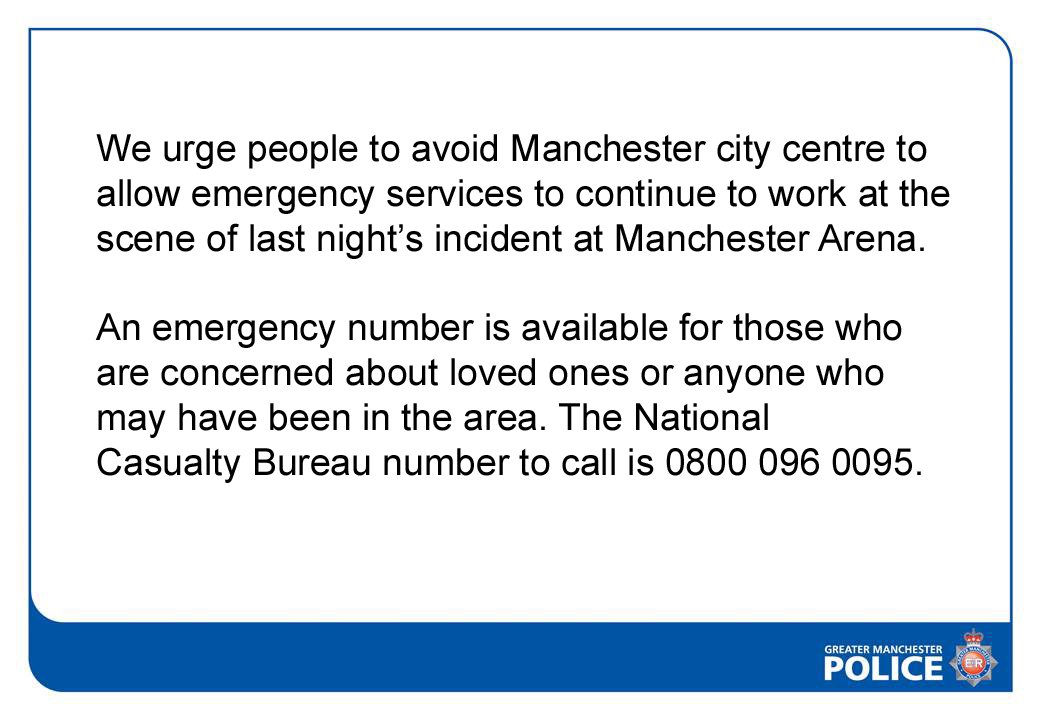 Further investigation into the bomb explosion at Ariana Grande’s concert in Manchester Arena, England led to the arrest of a 23-year-old man believed to have connection to the concert bombing on Monday night at around 10 p.m. local time.

“With regards to last night’s incident at the Manchester arena, we can confirm we have arrested a 23-year-old man in South Manchester,” the Greater Manchester Police (GMP) posted on its official Twitter account.

The local police also advised people to “avoid the Manchester city centre to allow emergency services to continue to work at the scene of last night’s incident at Manchester Arena.”

The concert explosion killed at least 22 people, including children, and injured 59 others on Monday night, according to various reports online.

At a broadcasted press conference earlier, GMP Chief Constable Ian Hopkins described the attack as a “terrorist incident,” adding that it was conducted by one man based on their preliminary investigation.

The suicide bomber, believed to have carried an improvised explosive device, died at the scene.

The U.S. Department of Homeland Security said it is closely monitoring the situation and working with foreign counterparts to acquire additional information about the incident.

It likewise advised U.S. citizens in the area to follow instructions from Manchester authorities, maintain security awareness, and contact the U.S. Embassy in London for any assistance.

“At this time, we have no information to indicate a specific credible threat involving music venues in the United States. However, the public may experience increased security in and around public places and events as officials take additional precautions,” it added.

Candian Prime Minister Justin Trudeau tweeted his statement reminding to “keep the victims & their families in your thoughts.”

German Chancellor Angela Merkel also said in a statement that Germany stands by Britain’s side. “This suspected terrorist attack will only strengthen our resolve to work with our British friends against those who plan and execute such inhuman acts.”

Meanwhile, Grande, a young American actress and singer, posted on her Twitter account: “broken. from the bottom of my heart, i am so so sorry. i don’t have words.”