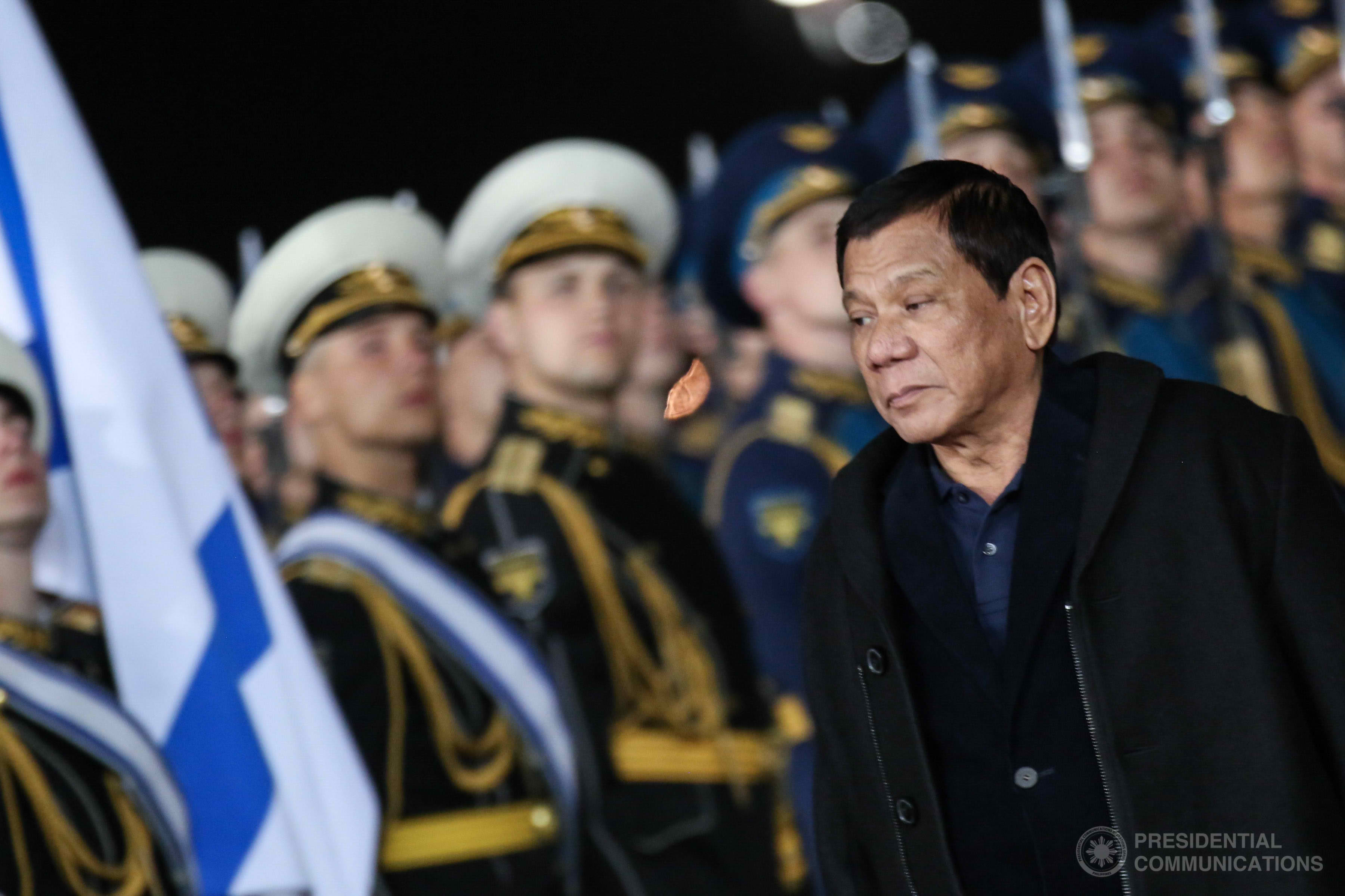 After declaring Martial Law in Mindanao Tuesday evening, Philippines President Rodrigo Duterte arrives at the Ninoy Aquino International Airport in Pasay City on May 24, Wednesday afternoon, from his shortened official four-day trip in Moscow to meet with Russian leaders.

In his arrival speech televised and also posted live on the Presidential Communications Operations Office’s (PCOO) Facebook account, Duterte said: “By virtue of the powers vested in me and the constitution and the law, I had to declare martial law in the Mindanao group of islands for a period of not more than 60 days, effective May 23, 2017.”

He also announced the suspension of the privilege of the writ of habeas corpus in Mindanao.

He disclosed that there’s no need for him to secure any search warrant or arrest warrant. “If you are identified positively on the other side, you can be arrested and detained.”

Duterte admitted he can’t gamble with the global terrorist network, Islamic State of Iraq and Syria (ISIS), “because they are everywhere,” likewise stating the need for the government to put an end to this.

He also referred to the acts of Maute group terrorizing Marawi City since yesterday as constituting the “crime of rebellion.”

He said that as soon as he saw the flag of ISIS being raised, he thought it must be stopped.

He further noted his willingness to gamble with Martial Law to address terrorism.

He said the declaration may be extended to Luzon and Visayas, the latter in particular for its proximity to Mindanao and in case of a spillover of terrorist activities.

He, however, guaranteed there will be no abuses with the Martial Law declaration.

During his bilateral meeting with Russian President Vladimir Putin Tuesday evening, Duterte apologized to the leader for cutting his official trip short due to the ongoing situation in Marawi City in Mindanao, according to the statement released by the PCOO on May 24.

Putin replied that he is happy to see Duterte in Moscow and expressed his sympathies. “I have to express our condolences as a matter of fact, loss of lives of your people happened because of a horrible terrorist attack. And my colleagues and myself definitely understand quite well that you do have to come back to return to your motherland.”

The Russian leader also expressed his hopes for the conflict to be resolved soon “with minimal losses and casualties.”

Upon the declaration of Martial Law, Duterte has to report to Congress within 48 hours to seek the members’ decision through a majority vote as mandated by the Constitution.

Presidential Spokesperson Ernesto Abella said in a statement that the declaration of Martial Law in Mindanao, including Jolo, Sulu, and Tawi-Tawi, is necessary for the suppression of lawless violence and rebellion as well as for public safety.

“The government is in full control of the situation and is fully aware that the Maute/Isis and similar groups have the capability, though limited, to disturb the peace; these have shown no hesitation in causing havoc, taking innocent lives and destroying property,” he further said.

The declaration was based on Article VII Section 18 of the Philippine Constitution, Abella said, quoting Deputy Executive Secretary Menardo Guevarra.

Various reports said the clashes ensued in Marawi City at around 2 p.m. Tuesday when government forces stormed an apartment, which is close to the Lanao del Sur provincial police office headquarters at Barangay Basak in Marawi City, purportedly used as meeting area of Abu Sayyaf leader Isnilon Hapilon and members of the Maute group.

The police and military forces were supposed to serve an arrest warrant to Hapilon, reports said.

Police authorities said the terrorists occupied a jail, a city hall, and a hospital, as well as burned several residences and buildings.

While the firefights are only in Marawi City, Defense Secretary Delfin Lorenzana clarified the need to place the entire Mindano under Martial Law because of other concerns in the other areas of Mindanao.

Lorenzana likewise said this would allow government security forces to monitor movements in the island, which could assist in pursuing criminals.

Before the declaration of martial law, Abella said the President convened with his advisers.

The Maute group was said to be behind the explosion.

Various reports said Hapilon’s ASG already pledged allegiance to the IS group, aside from having an alliance with the Maute terror group.