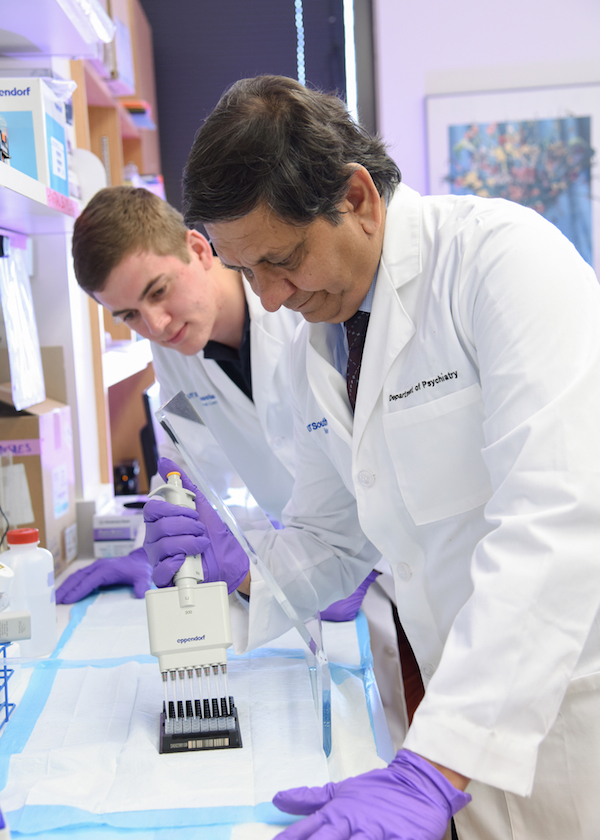 Two interventions—one slightly invasive and the other non-invasive—separately give new hopes for depression sufferers.

Scientists at the UT (University of Texas) Southwestern Medical Center’s Center for Depression Research and Clinical Care have unlocked for the first time what might be an effective way of telling which prescription for depression could give the best outcome for a sufferer.

According to lead researcher Dr. Madhukar Trivedi, this blood test measures the level of a certain type of protein, C-reactive protein (CRP), in a patient. The test involves a simple finger-prick test to measure CRP, which “can help doctors prescribe a medication that is more likely to work.”

An end to the guessing game?

“Currently, our selection of depression medications is not any more superior than flipping a coin, and yet that is what we do. Now we have a biological explanation to guide treatment of depression,” said Dr. Trivedi, who is also Director of the depression center, according to a report by the Science Daily.

This new study is a big boost to the long-held method of prescribing medicines to patients that relied heavily on their answers to questionnaires. “It pushes the medical field beyond what has essentially been a guessing game of prescribing antidepressants,” according to the report.

The groundbreaking research gives light to why about 30% depressed patients do not get better during their first medication, according to the report, and why about 40% of them stop taking their antidepressants within the first three months of medication.

Published in Psychoneuroendocrinology, the new research found a strong link between the CRP levels of 100 depressed patients taking either escitalopram alone or escitalopram plus bupropion and which improved their symptoms.

“For patients whose CRP levels were less than 1 milligram per liter, escitalopram alone was more effective: 57 percent remission rate compared to less than 30 percent on the other drug,” the researchers reported.

“For patients with higher CRP levels, escitalopram plus bupropion was more likely to work: 51 percent remission rate compared to 33 percent on escitalopram alone.”

According to Trivedi, their findings “provide evidence that a biological test can be used in clinical practice,” noting that “the results could readily apply to other commonly used antidepressants.”

“Both patients and primary-care providers are very desperately looking for markers that would indicate there is some biology involved in this disease. Otherwise, we are talking about deciding treatments from question-and-answer from the patients, and that is not sufficient,” said Dr. Trivedi,

There’s an app for that

While the question-and-answer way to look for the best medicine might be a thing of the past, this biological marker might still be complemented by a non-invasive, technology-based tools in helping sufferers monitor their condition and engage professional counselors as well as other depressed or recovering patients.

Mental health apps (MHapps) have surfaced in recent years, promising to provide help to patients using their smartphones. Researchers have sought to examine if these MHapps provide evidence-based tools that could help patients manage their depression, anxiety, and other mental health issues.

In the article “Mental Health Smartphone Apps: Review and Evidence-Based Recommendations for Future Developments,” published in the JMIR Mental Health in 2016, researchers, led by David Bakker, of the School of Psychology and Monash Institute of Cognitive and Clinical Neurosciences, Faculty of Medicine, Nursing and Health Sciences, Monash University, Clayton, Australia, reported that not a single guide for developing evidence-based MHapps exists, and that many of the MHapps currently available “lack the features that would improve their functionality, or include features that are not optimized.”

“Indeed, a previous systematic review revealed a complete lack of trial-based evidence for many of the hundreds of MHapps available,” according to the article, noting that developers of these MHapps seldom conduct or publish ‘trial-based experimental validation’ of their apps.

The study released 16 recommendations for developers to consider in their future work, including cognitive behavioral therapy based (CBT); activities explicitly linked to specific reported mood problems; links to crisis support services; and experimental trials to establish efficacy, among others.

In the end, to function effectively, MHapps should help prevent mental health problems and to ease the burden on health systems, the research said.

Global state of mind and MHapps

The WHO Depression and Other Mental Disorders Global Health Estimates published this year reported that the 2015 estimates placed the number of people suffering from depressive disorder is at 4.4% or 322 million people, while 3.6% or 264 million people, suffer from anxiety disorder, which are referred to as the common mental disorders.

Getting mental health care to where they are most needed is still a challenge. According to the WHO, “the gap between the need for treatment and its provision is wide all over the world,” which results in the burden of mental disorders not adequately responded to by health care systems.

According to the research led by Bakker, “MHapps and other technology-based solutions have the potential to play an important part in the future of mental health care,” citing the work of David Kessler and his colleagues in their evaluation of internet-based psychotherapy program for depression in terms of acceptability and clinical effectiveness. They found that almost 60% of those offered the program completed five or more therapy sessions, a higher rate than those who did in-person therapy, according to the article. Furthermore, not only were there more clinical benefits in computerized self-help programs, but they were also similar to traditional in-person therapy.

These technology-based solutions can also make mental health support more accessible, thereby reducing barriers in seeking help, according to the Bakker research, adding that “even when people are aware of their problems and are open to seeking help, support is not always easily accessible, geographically, financially, or socially.”

The National Mental Health Institute, the lead federal agency for research on mental disorders and a component of the US Department of Health, while citing the pros and cons of MHapps, has warned that “this new technology frontier includes a lot of uncertainties,” owing to the ‘very little industry regulation and very little information on app effectiveness that lead consumers to wonder which apps they should trust.”

The NMHI has proposed though that it is important to look at the pros and cons of “expanding mental health treatments and research into a mobile world.”

0 comments on “New hopes for depression: A prick test and a smartphone app”