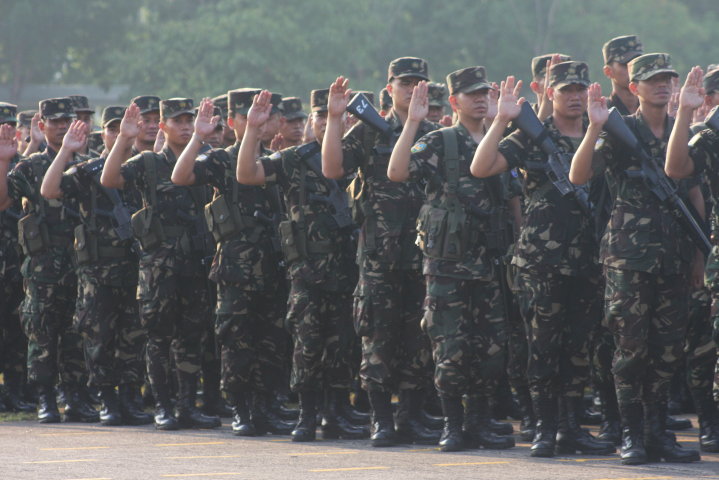 At a flag raising ceremony one morning in this war-ravaged Marawi City in southern Philippines, soldiers were seen crying while listening and singing the country’s national anthem on an Independence Day celebration, past a month of fighting with a local terrorist group that pledged allegiance to the international terror network ISIS.

The report said, along with civilians, the crying soldiers were photographed in an ‘emotional moment,’ their images going viral from the Lanao del Sur provincial capitol from where the customary flag-raising ceremony was being held to mark the country’s 119th year of independence.

The soldiers have been in battle for over a month now, and the death toll among them continues to rise, now placed at 62, according to a report.

The Philippines’ armed forces said the country’s flag will be raised come Independence Day celebration on June 12th in all of Marawi City, “whether or not the city would be liberated of terrorists,” according to another report.

Reports have said that the flag-raising ceremony was held amidst sounds of bombs rocking the city, the first in three weeks after the first day of the siege on May 23, which likewise “symbolized the reclaiming of city hall and other areas of Marawi City by government forces,” making it an emotional moment for civilians and uniformed men alike.

Combats, Marawi Seige included, large and small by the death toll measure, leave an invisible wound deep inside some of surviving soldiers, a condition called post-traumatic stress disorder, or PTSD, which, in this case, is a ‘war-induced psychological trauma.’

According to Meriam Reisman, in an article she wrote in 2016 for Pharmacy & Therapeutics titled “PTSD Treatment for Veterans: What’s Working, What’s New, and What’s Next,” while PTSD does not only affect military people, “the problem is especially acute among war veterans.”

While the disorder may affect any person, who has been through a trauma, such as “a natural disaster, a serious accident, a terrorist act, war/combat, rape or other violent personal assault,” the case of PTSD in soldiers who got it post-Vietnam War (1975) received renewed attention from public health workers, especially after the more than 10-year war in the Middle East that ended in 2011, according to Reisman.

In a 2008 population-based study conducted by the RAND Center for Military Health Policy Research, the prevalence of current PTSD was examined among 1,938 returning service members who were previously deployed in Operations Iraqi Freedom and Enduring Freedom and was found at 13.8%.

According to the US Department of Veterans Affairs, “veterans returning from combat was a critical piece to the creation of [PTSD] diagnosis,” as their experience takes a physical and emotional toll not only on themselves but also their families and communities. “So, the history of what is now known as PTSD often references combat history.”

Psychological trauma induced by war, according to Reisman’s article, “likely goes back as far as warfare itself, with one of its first mentions by the Greek historian Herodotus,” who described an Athenian warrior who “went permanently blind after a soldier who was standing next to him was killed, although the blinded soldier himself had not been wounded.” According to Reisman, many early cultures had featured accounts of psychological symptoms like these. “It is theorized that ancient soldiers experienced the stresses of war in much the same way as their modern-day counterparts.”

In more recent times, she wrote: “Over the next century of American warfare, PTSD would be described by many different names and diagnoses, including “shell shock” (World War I), “battle fatigue” (World War II), and “post-Vietnam syndrome.”

About 700,000 Vietnam veterans—almost 25% of those who served in the war—have required some form of psychological care for the delayed effects of combat exposure, Reisman also wrote.

A research that involved the returning servicemen from the Vietnam War, and other trauma victims, established the relationships between the trauma they experienced and their lives after the war, giving rise to the addition of PTSD to the third edition of the Diagnostic and Statistical Manual of Mental Disorders (DSM-3) in 1980 by the American Psychiatric Association. Then, it belonged to the group of ‘anxiety disorders.’

The significant revision done in the 2013 PTSD diagnosis criteria, as included in the DSM-5, was that it ceased to be classified as an ‘anxiety disorder’ but is now classified in a new category called ‘Trauma and Stressor-Related Disorders,’ in which “the onset of every disorder has been preceded by exposure to a traumatic or otherwise adverse environmental event.”

PTSD as a risk factor for other conditions

In a May 2017 report issued by Science Daily, a new research found that “young veterans with combat-related PTSD have an increased ‘fight or flight’ response during mental stress.”

The research, conducted by a team at the Emory University School of Medicine (Atlanta, Georgia) and published in the Journal of Physiology, found “this response contributes to the increased the risk of high blood pressure and heart disease in PTSD patients.”

Saying that to protect patients against hypertension and cardiovascular diseases, there is a need to understand how their physiology malfunctions to identify treatments, Dr. Jeanie Park, who led the research, also said, “This study looked specifically at veterans with combat-related PTSD, so the findings do not necessarily apply to non-veterans with PTSD, nor to patients with non-combat-related PTSD.” The research team studied the physiology of 14 patients with PTSD and 14 who did not, all of whom were post 9/11 veterans.

Estimates from the US Centers of Disease Control and Prevention indicate that veterans account for about 20% of suicidal deaths in the US, according to a 2013 report, “Department of Veterans Affairs/Department of Defense Clinical Practice Guideline for Assessment and Management of Patients at Risk for Suicide.” This percentage, according to the report, indicates that 18-22 veterans per day die from suicide.

Although there is debate as to whether PTSD and suicide are closely linked, a 2015 study found that the chances of suicide increase when a person leaves active military service with less than four years of service and “discharge that is not honorable” were risk factors for suicide.

Researcher Susan Frayne, a physician with VA Palo Alto Health Care System and Stanford University, cautioned however that “the researchers could only point to an association between the PTSD and additional medical illnesses,” and that studies in the future may reveal whether PTSD somehow directly contributes to the additional conditions.

Reisman wrote in her report that PTSD prevalence rate among returning soldiers vary across wars and eras, adding that rates could run from 13.5% (in a major study of 60,000 Iran and Afghanistan veterans) to as high as 20 to 30% in other studies.

Dr. Paula P. Schurr, PhD, Executive Director of the VA National Center for PTSD, had said, according to Reisman’s report, that “the urban-style warfare tactics in Afghanistan and Iraq, marked by guerrilla attacks, roadside improvised explosive devices, and the uncertain distinction between safe zones and battle zones, may trigger more post-traumatic stress in surviving military members than conventional fighting.”

Continuing research on combat-related PTSD is warranted owing to changes in the warfare landscape, and in that “improvements in protective gear and battlefield medicine have greatly increased survivability,” according to Schurr in Reisman’s report.

Described as “a lot like the siege of Zamboanga City in September 2013, but much worse,” Carmela Fonbuena of online news Rappler in the Philippines reported “urban warfare challenges the Philippines military.”

Armed Forces of the Philippines (AFP) Chief Eduardo Ano had told Sunstar why it would take them some time to fully neutralize the enemy: “We have to clear one step at a time, house to house, block by block,” adding that “military operations will not be easy in an urban terrain as compared to the rural area.”

Meanwhile, wounded soldiers in the Marawi siege continued to receive “anti-traumatic” treatment, according to a report by Sunstar, as way to prevent PTSD.

“Psycho-social intervention is part of the army’s protocol every time the army troopers went through war and armed conflicts,” the report quoted a military spokesperson as saying, and adding that “soldiers inflicted with minor or serious physical, emotional, and psychological wounds must be treated this way to prevent post-traumatic stress disorder.”

In a 2015 report, data from the AFP Medical Center showed that in 2011, 35 soldiers were diagnosed with PTSD, 16 in 2012, 21 in 2013, and 17 in 2014. The report said the data included only those who were admitted to the medical center’s psychiatry ward. “The number is not increasing but it is also not decreasing because Filipino soldiers have strong coping mechanisms. Besides, the AFP is now strict in terms of neuropsychiatry exams,” AFP Medical Center public information officer Maj. Eddie Ballunso was quoted as saying. “Besides, Filipinos are known to be very resilient.”

As PTSD has been defined and redefined over time since it was officially introduced in DSM-5 in 1980, the combat-induced PTSD remains a concern in today’s evolving warfare landscape, and despite many advancements in understanding and treating the disorder.

Riesman, in her conclusion, said that having “further understanding of the underlying physiological and neurological processes will be helpful in developing new and effective therapies to treat PTSD.”

3 comments on “PTSD: What’s next for this war-inflicted mental disorder?”