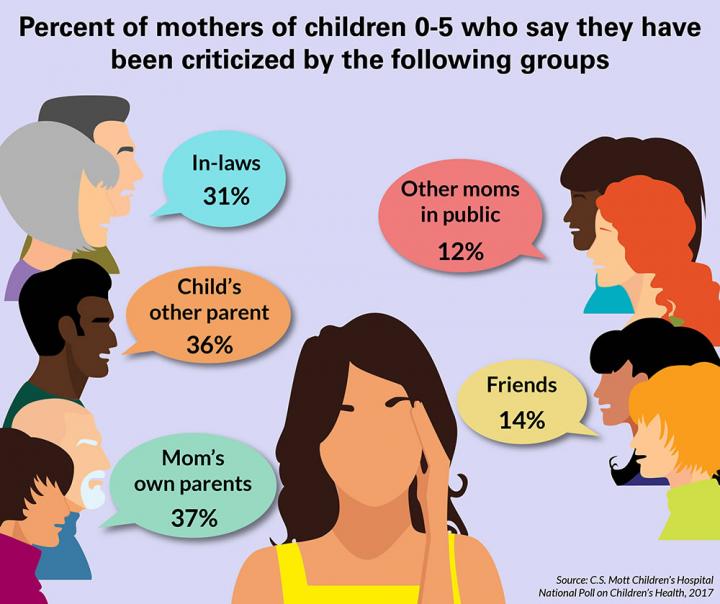 We are all aware of stories of bullying that target the youth today, but little did we know that even our own moms could suffer massive shaming about their parenting style.

In the studies of C.S. Mott Children’s Hospital National Poll on Children’s Health at the University of Michigan, six out of 10 mothers of children with age range of 0-5 admitted having been criticized of their parenting skills in all aspects, from discipline to breastfeeding.

“Mothers can get overwhelmed by so many conflicting views on the ‘best’ way to raise a child,” poll co-director Sarah Clark, M.P.H., said in a statement. “Unsolicited advice — especially from the people closest to her child — can be perceived as meaning she’s not doing a good job as a mother. That can be hurtful.”

Clark added: “Our findings tap into the tensions moms face when parenting advice leads to more stress than reassurance and makes them feel more criticized than supported.”

Even celebrities are not immune to being shamed for their parenting style.

Actress Reese Witherspoon, for instance, was a hot topic recently for being “food-shamed” after feeding her toddler cinnamon buns for breakfast.

Detractors likewise bashed model Coco Rocha for bottle-feeding her baby, but she quickly cleared her side on her Instagram post.

“Not that this is anyone’s business – I loved breastfeeding Loni for the first 5 months of her life and then one day my milk went dry. It happens to every mom at different times. She’s been on formula for a few weeks now and seems to be doing just fine,” she posted.

American model Chrissy Teigen also defended her fellow moms saying, “I will never know why parents criticize others so harshly, knowing they’d go insane if they were on the receiving end ALLTHETIME. NO parent out there thinks they’re perfect… Who would want to make someone feel horrible for fun?”

While celebrities get bashed by anonymous commentators, the poll revealed that the frequent critic of a mother is her own parents according to its 37% of respondents.

It was followed by 36% of poll respondents saying that their own spouse offends them too, add to that their in-laws at 31%.

The area of discipline is where mothers mostly get criticized according to the study, with 70% of mothers having experienced being shamed.

Respondents tend to receive lesser criticism from friends and other mothers they meet in public, the poll said.

Clark also specified that the subject of discipline is common occurrence with opposing viewpoints and cultural differences, such as strict supervision versus giving space for a child to explore.

Long-held parenting and traditional practices that other relatives used themselves or were raised with may no longer be applicable with new data child health and safety nowadays, making it a challenge for many mothers.

“Family members should respect that mothers of young children may have more updated information about child health and safety,” Clark said, “and ‘what we used to do’ may no longer be the best advice.”

Despite the result of 42% of mothers doubting their parenting style, it has also pushed them to be proactive.

Children’s Hospital National Poll on Children’s Health said that others responded to “shamers” by consulting a professional heath care provider more than their own family members.

Sixty percent of moms admitted that they received a lot of irrelevant counsel from other people; 52% believed moms get accused and not get enough credit for their children’s behavior and welfare; and 50% of the respondents said they simply avoid people who are too opinionated.

“This indicates that most mothers view their child’s health care provider as a trusted source of accurate information and advice, not as a critic,” said Clark. “Child health providers can help by encouraging mothers to ask questions about any parenting uncertainties, and offer reassurance and practical advice that helps boost mothers’ confidence and reduce anxiety around choices.”

She also reminded: “It’s unfortunate when a mother feels criticized to the point where she limits the amount of time she and her child will spend with a family member or friend. To guard against that situation, advice to mothers of young children should be given with empathy and encouragement.”

0 comments on “Mom-shaming trends, according to a national poll”