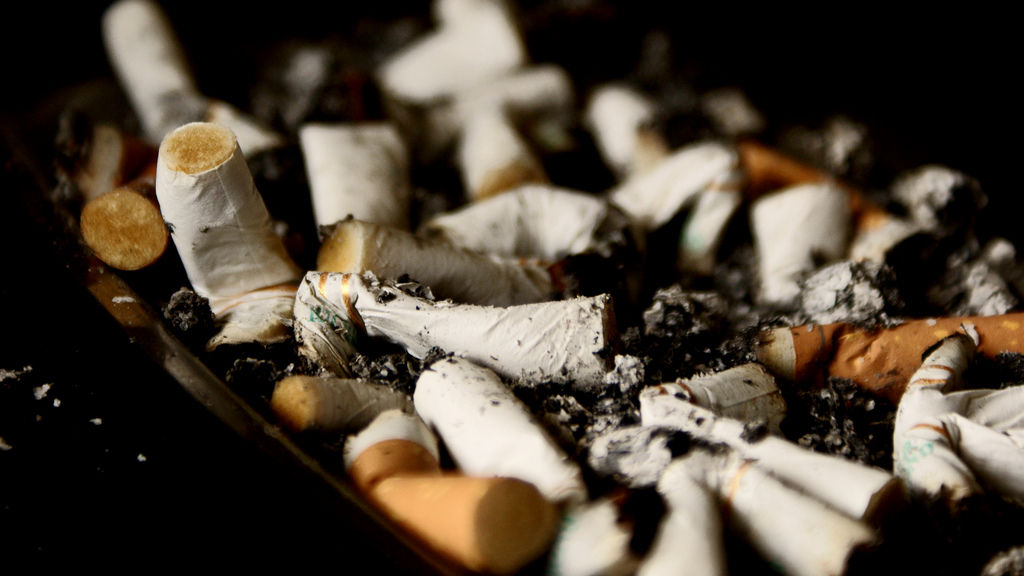 The point of cigarette smoking is nicotine, the known addictive substance that gives smokers the ‘high’ just seconds after a single puff. Or, for the young, perhaps another reason is merely to be ‘in’ among peers or be like those on TV commercials, cool and hip. They get the nicotine kick just the same.

Nicotine is as addictive as cocaine or heroin, the US Surgeon General concluded in 2010. It stimulates the ‘reward center’ of the brain that elevates a smoker’s mood and as well as his or her brain function, but comes with a host of other ill effects on the body.

Nicotine isn’t the only the harmful ingredient that one gets in a cigarette puff, but thousands of others. According to the US Food and Drug Administration, cigarettes contain more than 7,000 chemicals, and more than 70 of those are known carcinogens.

The lungs and airways suffer, therefore, along with other parts of the body, their functions impaired and the smoker’s overall health put at risk as result of this toxic cocktail that includes carbon monoxide, arsenic, benzene, formaldehyde, lead, tar, among many others.

There is hope, especially for the lungs, as they can go back to their pre-smoking condition, provided the decision to quit smoking is made early enough and before a disease sets in.

It is possible for the lungs to revert to its normal function if a smoker quits before age 40, reason why Dr. Maria Encarnita C. Blanco-Limpin, a specialist in pulmonary medicine, advocates early quitting before the lungs begin to ail.

Limpin, who also heads the Action on Smoking and Health (ASH) Philippines, told Wired Correspondence that said smokers can have normal lung function, possibly as good as those who have not smoked if they quit early and if their lungs have not been compromised.

“Their lungs can possibly recover if they already have an illness,” Limpin added, further saying that studies have indicated that quitting at this early age can give the smoker greater benefits.

One such study was undertaken in 2013, which was reported in the New England Journal of Medicine, indicating the benefits of smoking cessation. “The effect of smoking cessation at younger ages was especially favorable,” the report said, adding that “for smokers who quit at 25 to 34 years of age gained about 10 years of life, as compared with those who continued to smoke.”

The report said, “cessation at about 39 years of age reduced the excess risk of death from any cause by about 90%.”

A smoker who already has ailing lungs may still recover, but like any deep wound, Limpin said, the scarring could be deep, too.

A quitter will experience the immediate and long-term benefits of kicking the habit, starting from 12 hours after quitting: the carbon monoxide level in the blood drops to normal. The lungs will start to heal in two weeks. Fifteen years after quitting, a smoker’s risk of getting a heart disease will be equal to that of a nonsmoker.

A quitter, a winner

“I feel good,” said Joey Ayala, a Filipino music icon, when asked how he was after almost a year without smoking.

Ayala told Wired Correspondence that he had attempted to quit many times in the past but it was only last year that he decided to quit for good.

He said his past attempts—more than 10 times but less than 20 times—were based on specific reasons, such as to sound good, out of respect for his audience and himself, before a concert. But he would go back to smoking after a performance.

“It was already painful,” Ayala said, describing how he felt each time he would have an attack asthma, which he had in childhood. He said the pain felt ‘deeper’ than asthma and that his medicines were not working anymore. He thought then that it was not asthma anymore.

He said he picked up the habit from his parents both of whom were smokers. “I must have tried to puff and cough at age seven,” he tried to recall. From then on, it became one stick, then another. He associated smoking with growing up, he said, and that he was already a ‘big boy.’ By the time he reached high school, he could finish a pack in three to four days.

Ayala, who recently turned 60, used to smoke a pack a day before deciding to kick the habit finally. He had not smoked single stick since almost a year ago after seeking professional help.

Call a quitline for help

According to the US Surgeon General, quitting is hard. But for smoking cessation advocates, what matters is that a smoker attempts—no matter how many times he or she fails, because the chances of succeeding increase.

The WHO global report on the tobacco epidemic 2015 stated that “most smokers want to quit but find it difficult because of the extreme addictiveness of nicotine.”

Parties to the WHO Framework Convention on Tobacco Control (WHO FCTC) should offer quitlines, as indicated in its guideline for implementing Article 14 of the convention on smoking cessation. The guideline said the quitlines should be “free and offer proactive support, and should be widely publicized and advertised.”

In addition, the guideline indicated, “parties are encouraged to include the quitline number on tobacco product packaging.”

Quitlines, which are telephone-based programs, have been shown to be effective in helping people quit smoking. Quitline services provides proactive counseling to the caller, whether he or she is the smoker or wants to help a smoker, and is manned by qualified practitioners in helping people stop smoking.

Quitting smoking the ‘cold turkey’ way is not the only way, and those residing in the US can call 1-800-QUIT-NOW (1-800-784-8669). For a free and confidential telephone service providing customized assistance to help a smoker with his or her smoking attempt, residents of Australia can call 13 7848 (13 QUIT). Those in the Philippines can call the recently launched quitline, 165364.

A brain circuit and smoking cessation

Early this year, a team of researchers at the Medical University of South Carolina (MUSC) Hollings Cancer Center reported their recent findings: a link exists between the strength of communication in a brain circuit that inhibits automated behavior and the ability to resist smoking.

According to the summary report posted in the JAMA Psychiatry, “smoking becomes an automated behavior over time,” and so the researchers, led by  Brett Froeliger, Ph.D, an addiction scientist in the MUSC Department of Neuroscience and Hollings Cancer Center, wanted to find out if there was a link between the brain’s circuitry that drives habits and a smoker’s weakness for a relapse.

The research indicated that smokers who have stronger communication in this circuit, called the inhibitory control network, have greater chances at quitting smoking successfully.

These findings likewise explained “why some smokers who are trying to resist smoking have more success than others.”

According to a MUSC report, further examinations of “therapies that support this pathway could help smokers who are trying to quit.”

0 comments on “Not All Quitters are Losers: Kicking the Smoking Habit Early”