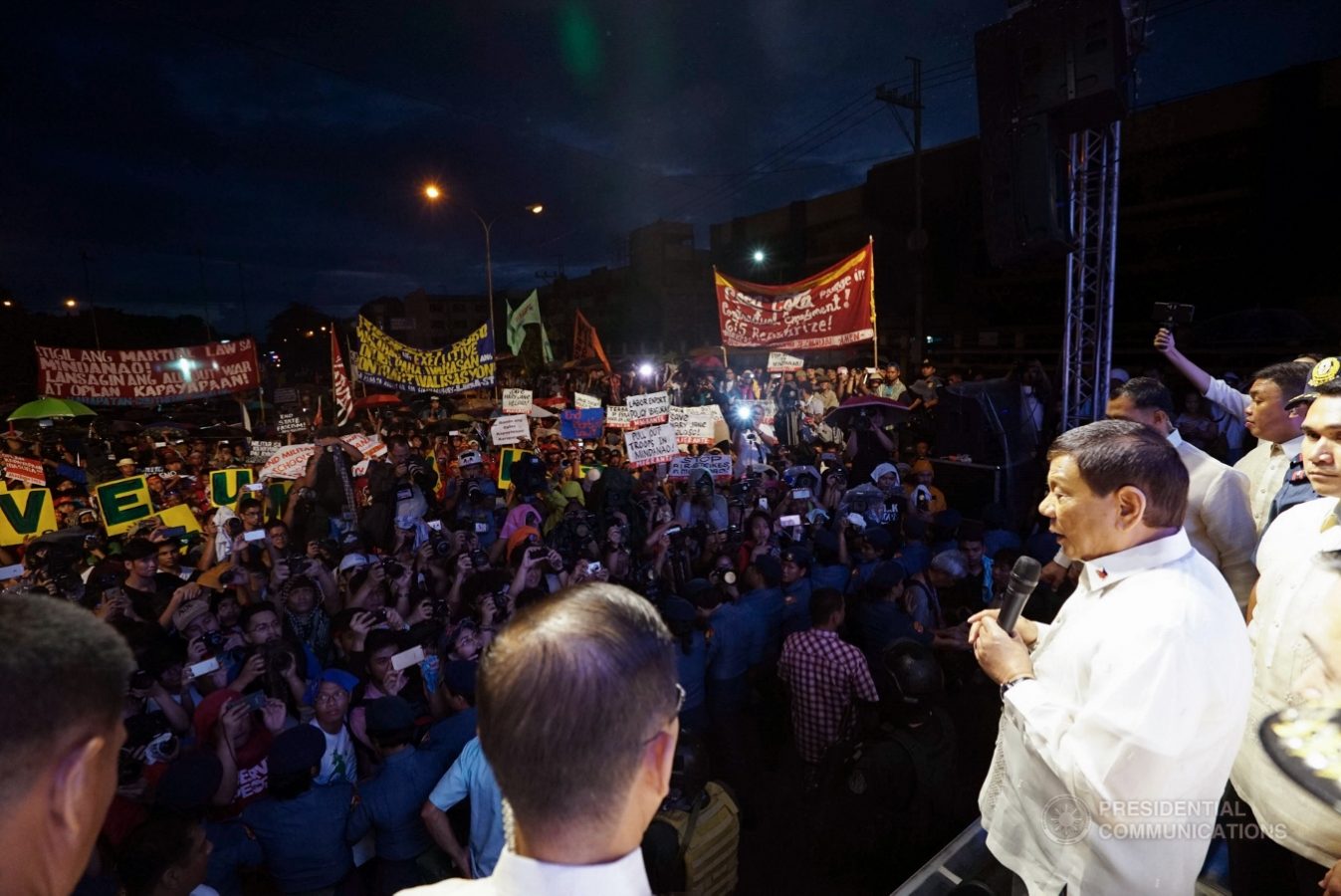 The continued fight against illegal drugs, the Martial Law in Mindanao, the peace talks between government and rebel groups, and the elimination of corruption were among the central points of the second State of the Nation of Address (SONA) of Philippines President Rodrigo Roa Duterte delivered at the session hall of Batasang Pambansa on July 24, 2017.

But what has changed since delivering the second SONA? Here’s what we found out and what a few people think.

The Quest for a Drug-Free Country

The Chief Executive spoke about his known priority of eliminating illegal drugs in the country, saying there would be no turning back despite international and local criticism. “The fight will be unremitting as it will be unrelenting. Despite international and local pressures, the fight will not stop until those who deal in it understand that they have to cease, they have to stop because the alternatives are either jail or hell,” he said, eliciting a thunderous applause from the crowd.

True to his campaign, a bloodied and controversial drug raid killed Ozamiz City Mayor Reynaldo Parojinog Sr., his wife Susan, and many others others on Sunday, July 30, at around two in the morning by police authorities serving warrants of arrests on drug charges and illegal possession of firearms against the official. Parojinog Sr. was in the list of suspected drug lords of President Duterte, but the former repeatedly denied the accusation.

Moments after the SONA, the President confronted thousands of protesters—to their surprise—who were a few hundred meters outside the Congress building, asking him to lift martial law in Mindanao and to continue the peace talks with the National Democratic Front, among other issues. He said martial law is not “forever,” adding that there are only few remaining opponents in the area, but only to elicit boos from the rallyists.

Regardless, Duterte asked the protestors for more time in resolving all the issues involving the rebel groups in Mindanao. He encouraged the rallyists to talk to his Cabinet members Liza Maza, Judy Taguiwalo, and Leonor Briones as they could explain how he has been working on the problems related to the leftist group.

However, on August 2, Duterte vehemently expressed that he is ready to sign a formal notice of termination to end all peace talks with the communist rebels. But the government peace panel still awaits his final instruction to send a formal letter terminating peace talks with communist rebels, according to government chief negotiator Silvestre Bello III. Termination of peace negotiations will be effective 30 days after receiving the official letter.

Improvement in the Education Sector

President Duterte also assured that his administration fully supports the complete implementation of the K to 12 Basic Education Program nationwide. He also said that the government is doing its best to widen the reach of the Alternative Learning Program for the Out of School Youth.

A historic moment happened on August 3 when he finally signed Republic Act 10931, or the “Universal Access to Quality Tertiary Education Act,” providing free education in public tertiary and vocational schools around the country. The following day, Senior Deputy Executive Secretary Menardo Guevarra announced it in a forum.

The RA 10931 covers other school fees for use of library, computer, laboratory, and medical, dental and guidance services, among many others. It likewise offers subsidies or stipend to poor students and creates a student loan program. Students who are financially capable, however, may opt to not avail of said subsidies through a mechanism by the public and vocational schools.

Topping the list of countries with slowest Internet connection, the Philippines will have affordable and effective Internet access in the country as the cabinet approved the National Broadband Plan in March this year, according to President Duterte during the speech.

The Rebirth of Death Penalty

A strong advocate of death penalty, President Duterte asked the Congress to pass the bill quickly, saying in his speech that “capital punishment is not only about deterrence,” but “also about retribution.”

The death penalty bill, however, wasn’t included among the priority list of measures by the Congress, according to a recent news report.

“The discussions do not end here, but this delay provides more time for our lawmakers and fellow Filipinos to delve further into the issues surrounding capital punishment and the risks it poses should it ever pass into law,” the Liberal Party, formerly the ruling party in the Philippines, said in a statement. It also said that the delay is a “small but substantial victory.”

The Congress instead wants to prioritize bills on “endo” or contractualization, traffic emergency powers, tax reforms; the revision of the 1987 Constitution; and the approval of the proposed Bangsamoro Basic Law.

For Peter Montilla Jr., 71, who is a retired U.S. Navy Officer now permanently staying in Villasis, Pangasinan, it’s too early to pinpoint the changes and development under the Duterte administration. “That would be too hard for anything to make any judgment in terms of what is really passing through in one year. Knowing Filipino’s attitude to slow down, take your time, that sense of attitude,” he told Wired Correspondence.

He, however, agreed with the President’s efforts to ward off corruption, saying, “we have seen that the government is doing its best for not having corrupt officials.” But the problem with illegal drugs in the country is something that he himself doesn’t know how to resolve.

When asked what he thinks of the President’s move to go out and talk to the rallyists after his SONA, he said: “He is a bold man. He puts himself in danger. The rallyists already set their minds, no one would listen to him. Actually I think going there is an act showing he is not afraid to die. That’s a good thing for them, but a bad thing for his security guards.”

The situation in Marawi City that has lasted for nearly three months now also has puzzled him. He said previous administrations were well aware of the terrorist groups forming in Marawi, but didn’t do anything to prevent it. “Look what we’ve got now?” said Montilla. He called it “a bad sign for the security intelligence in the country.”

Other important issues should have been elaborated as well in the SONA, Montilla said. He cited the Philippines and China relations amid the sea dispute and, far more importantly, the poverty in the country and the rights of the people.

But as for 22-year-old Iyah Dacer Saturno, an Executive Assistant from Quezon City and admittedly a pro-Duterte supporter, the current administration has so far done well. “The biggest and most significant change I have noticed is that he promised he would lessen the crime here in the Philippines. Although he only promised it within only 3-6 months, I guess he needed more time to completely fix the problem. Despite that, the country feels much safer now. It may not be a zero crime rate country, but my fear has been lessened,” she told Wired Correspondence.

Meanwhile, Stephanie Laguardia, an 18-year-old third year B.S. Architecture student from Quezon City, found imposing disciplinary measures under the Duterte administration, such as barangay curfew that prohibits minors to lurk out of their homes past 10 p.m., “a good thing.” But she further said in an interview with Wired Correspondence that there’s a need for the President to also look into the outcry of students in private universities in terms of very expensive tuition fees, to which she found a lack of answer from the President.

Though beyond the efforts of the government to address these issues, Montilla hopes to see his countrymen also being polite and obedient to the laws of the country—something he observed in Filipinos who had moved to the U.S. By doing so, people become productive citizens, he added.

In the Philippines, there’s the attitude of “ako muna,” or putting yourself first or ahead of everybody else, but Montilla said, “We have to change it, the crab mentality. If not, there will be no progress in the country.” While it’s hard for some people to change their attitude, he strongly believes that change must also come from the whole nation.

0 comments on “After Duterte’s Second SONA, Now What?”