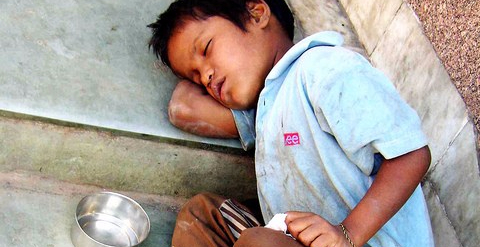 The mere mention of the word ‘poverty’ evokes a certain kind of sadness. A family of five living under a dilapidated bridge in highly-urbanized Manila or students in slippers walking miles to get to their school because of lack of money even for transportation—these images of poverty can tug at the heartstrings.

What is poverty? Is it just about not having enough money in one’s pocket? Is it about people begging in the streets for food and alms? Not quite so, according to the World Bank Organization (WBO).

The lack of money is “only one aspect of poverty,” Oxfam Asia Regional Director Lan Mercado told Wired Correspondence. “Poverty is also the lack of income, the lack of opportunities, the lack of a voice to be able to participate and influence decisions that impact their lives, and the lack of equal status in society,” she further said.

To illustrate, in some recent studies, rich countries may even have poor quality of life and that a high per capita GDP does not translate to a good economic standing of each person. For instance, Sri Lanka and the Indian state of Kerala may have a low GDP capita, but their literacy rates and life expectancies are quite higher than those of rich countries, such as Brazil and South Africa. In addition, African Americans in the U.S. have lower life expectancies than that of China in spite of the average income.

Interestingly, many point to poverty as the sole cause of crimes, such as the proliferation of illegal drug trade, theft, burglary, kidnap for ransom, scamming, and murder, among others. Some people also believe that poverty is linked to social ills, such as hunger, unemployment, and illiteracy.

But Mercado dispelled the first mindset. “There are rich people who commit crimes so to say that poverty is the root cause of crimes is problematic,” she said. “And not all crimes are equal. However, poverty and crime are linked.”

Yet, she agreed that “poverty is at the root of illiteracy – the inability to read and write.” Distinguishing it from education, she added: “Poor people can sometimes be better educated than rich people. But getting an education is premised on being able to read and write.”

She further stated that hunger, for instance, is not just about the access and availability of food, but also about the right food quality and the ability to feed themselves with dignity and self-reliance.

Asked if poverty alleviation efforts by various governments and NGOs could reduce criminality, illiteracy, and other social ills of a country, Mercado said: “Assuming we now understand poverty as multi-dimensional, then solving poverty is not just up to government and NGOs. It is also the responsibility of businesses, especially big corporations, many of whom have business models that often cause poverty. It is also the responsibility of the individual members of society who must become more active, responsible and socially-aware citizens. As mentioned in the article on Amartya Sen, in the concept of development and poverty, people are agents of change.”

Sen is a Nobel Prize winner who was recognized for his contributions to welfare economics. He doesn’t see people as “passive recipients of benefits or mute followers of expert created policies,” rather as “people have to be seen … as being actively involved – given the opportunity – in shaping their own destiny, and not just as passive recipients of the fruits of cunning development programs.” As agents of change, he believes people can define their own priorities and likewise choose the appropriate ways to achieve them.

Research has shown that there has been marked progress in poverty reduction over the last couple of decades. The mission of the World Bank Group is to underpin all analytical, operational, and convening work in more than 145 countries and is encouraged by the goal of ending poverty and promoting shared prosperity. In fact, the world has already achieved the first Millennium Development Goal target, which was to reduce the 1990 poverty rate in half in the year 2015 but was already fulfilled in 2010—five years ahead of the planned time, according to World Bank.

“The biggest driver of the success is economic growth, but not any kind of economic growth,” said Mercado, when asked about the major contributor to reducing global poverty. But the economic growth needed is one that “improves the income-generating opportunities of the poor,” she said, which “involve either raising the value of the agricultural products that the poor are producing or generating better jobs.” She added: “Anywhere between two-thirds and 80 percent of the decline in poverty rates is due to this kind of economic growth.”

In a recent study published by the Science Advances journal, researchers in Australia and Sweden called into question the basis of development aid—”poverty trap” and its solution called “Big Push”—in which aid agencies assist rural economies trapped in the brutal cycle of underdevelopment by, for instance, providing cash to support agricultural needs such as fertilizers, seeds, and machinery, believing that the move will push said economies “over the barrier to become better functioning economies.”

However, decades-long criticism toward such single approach pointed to the chance of poverty persisting all the more in some areas for ignoring nature and culture.

“For the first time, we provide a way to extend poverty-trap thinking to more fully include the links between financial well-being, nature and culture,” Jamila Haider, a co-lead author at the Stockholm Resilience Centre, said in a statement. “This new approach makes it difficult for development agencies to ignore a broader range of options and solutions.”

Said study could advise better integration of the Sustainable Development Goals of the United Nations.

The research also said development aid is usually directed at “quick-fix financial and technological farming solutions.” Being among the first theories of development economics, “Big Push” remains a popular one-size-fits-all approach, regardless of its recognized limitations. Frequently, development organizations urge farmers to produce single-cash crops or monocultures they can peddle to overcome poverty, which has brought about mixed results. Although this has been successful in several other places, it can also result in deforestation as well as nitrogen or phosphorus pollution, among others. It has likewise led to a cycle of poverty in some cases where improved varieties of seeds failed due to disregard for local environmental conditions and culture, eventually worsening the condition of the land, losing important knowledge, and fortifying the poverty trap in the end.

But Haider and her team have a new approach that categorizes three types of solutions for poverty alleviation. First is the prevailing Big Push “over the barrier.” Second is “lower the barrier” that could involve farmers’ training to change practices and behavior. The two types shape the backbone of aid strategies at present. Third is “transform the system,” which the researchers introduced. Ultimately, it is about rethinking the strategy of intervention, the researchers said.

“If poverty in an area is causing environmental degradation then maybe a big push will work. But if the land has been managed sustainably for generations then development agencies need an approach that takes that knowledge into consideration,” said Haider. “This seems obvious, but intervention strategies can become blinded by powerful yet simplistic economic models. Some communities have remained resilient for generations through, for example, using many traditional seed varieties. We show how development interventions need to vary based on different relationships between poverty and environment.”

In a separate study, leaders from Abdul Latif Jameel Poverty Action Lab (J-PAL) of the Massachusetts Institute of Technology in fact examined if an antipoverty program that worked in one place can likely work someplace else. As one of the foremost centers for antipoverty research globally, the lab’s approach, however, is more about understanding the mechanisms that led to the success of the programs and less about repeating the program’s bottom-line results.

“If you completely replicated a program, you wouldn’t expect to have identical results in a different place,” Rachel Glennerster, executive director of J-PAL, said in a statement.

Mercado similarly said that you do not just “copy-and-paste” poverty alleviation programs when they have been proven successful in another place. “And there is no 100% guarantee that when you buy into an anti-poverty programme that was tried out in one place, that it would produce the same results in another. There are processes that enable adaptation.”

J-PAL illustrated four basic steps when one plans to duplicate or scale up an antipoverty program in an entirely new environment. The first step is identifying the components of the theory behind the program, which would involve breaking down the bigger components into smaller ones and see if the program still works – even in its parallel form. The second step is analyzing if the theory applies to local conditions, while the third is examining if there is strong evidence that shows the desired behavioral change will happen. The last step involves likewise looking at the evidence that the program’s implementation process can be conducted well. This stage would require solid and on-the-ground information about the place where it plans to carry the program.

“Even if a program may be based on a well-validated view of human behavior, you’ve got to know about the local context, about people’s ability to deliver it,” said Glennerster. “And that’s going to be very specific. Is the government or NGO good at implementing things?”

Meanwhile, for those still trapped in poverty in spite of community programs, what is keeping them poor is “inequality,” Mercado pointed out. “[It] stands in the way of greater poverty reduction,” she said, further saying that “poverty and inequality are not inevitable or accidental, but the result of deliberate policy choices” based on Oxfam’s decades of experience working in the poorest communities worldwide.

What the world needs are concerted efforts to create a much fairer economic and political system that values and includes everyone in the community, she also said. “The rules and systems that have led to today’s inequality explosion must change. Urgent action is needed to level the playing field by implementing policies that redistribute money and power from wealthy elites to the majority,” she added.

0 comments on “Poverty: More than meets the eye”