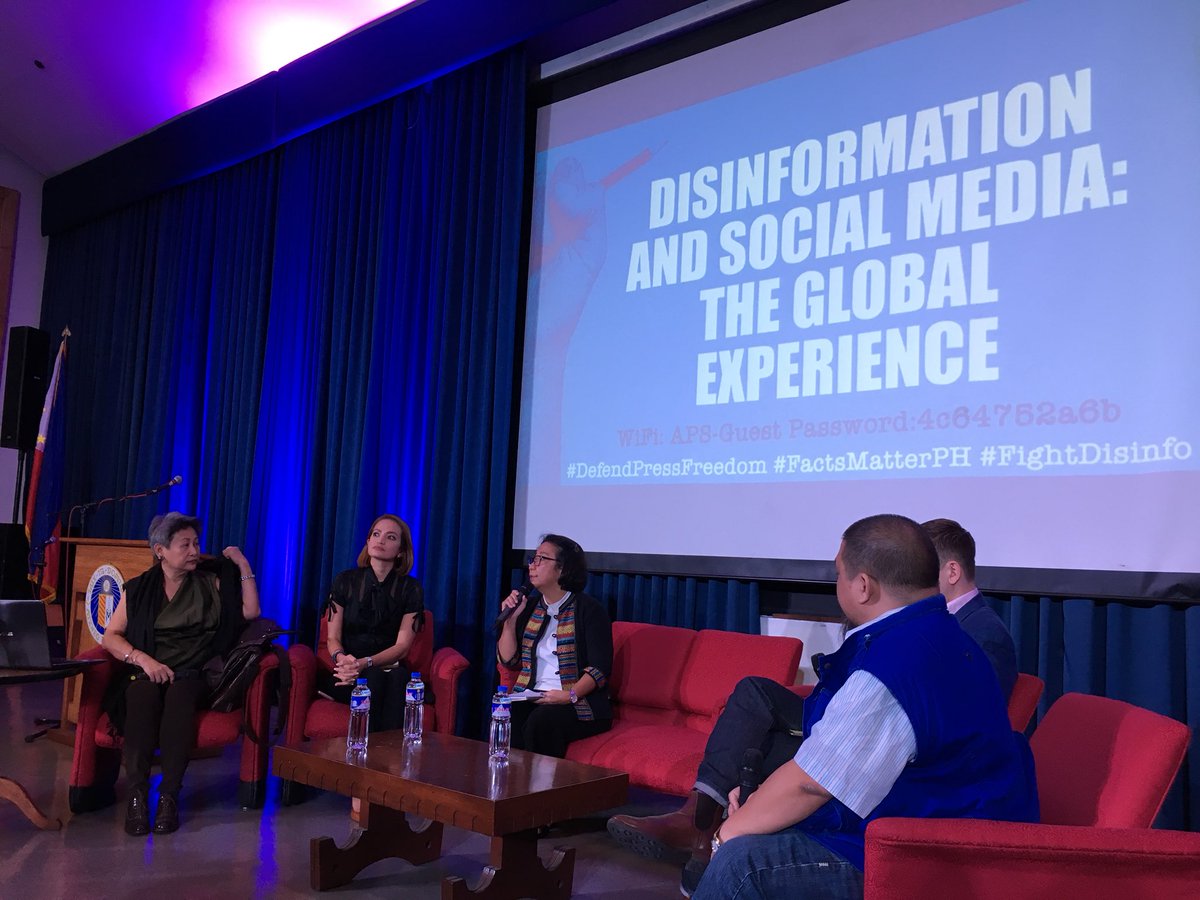 The world is reeling from what many refer to as “fake news” — it’s a phenomenon so insidious that it threatens democracy itself.

A better term for this concept, however, is “disinformation” according to the panelists at the Democracy and Disinformation Conference convened on February 12 and 13, 2018 at the Ateneo de Manila University Rockwell Campus in Makati City, Philippines.

Journalists, bloggers, media and PR professionals, students, and concerned Filipino citizens listened to and shared insights with 42 resource persons from the Philippines and abroad. Here are some of the highlights of the Conference, combined with photographs of the event as it unfolded.

Pulling no punches, the Conference’s first session took a long look at the possibility of the office of the president itself serving as a source of disinformation. Topics included the relevance of fact-checking; the tension in journalism today between newsworthiness and trustworthiness; and the burden and extra role media must take on in this day and age when many sources can be suspect.

Points brought up in this session included how misinformation and disinformation both threaten democracy, with the latter worse because it manifests the work of those who seek to deceive in pursuit of a political agenda; how hate speech proliferates and significantly constrains rational exchange; how social media can serve as a tool for manipulation; how public discontent with media is real and needs urgent attention; and how self-regulation is superior to regulation by government.

The panelists surfaced and discussed a wide range of subtopics, including how press freedom is not a privilege in a democracy but a right that is enshrined in our Constitution; how the overwhelming amount of hateful and misleading content online means that media must level up; and how collaboration between people and media agencies and companies is a necessity given the breadth of the challenges being faced.

The panelists also shared some examples of how their outfits tackled disinformation efforts, including fake websites that aped their own, and offered suggestions regarding how news consumers can be more vigilant moving forward.

The succeeding session sought to provide a more global perspective regarding social media and disinformation. To this end, it featured the participation of Claire Wardle (on pre-recorded video) of the Shorenstein Center at the Kennedy School of Government at Harvard; Iain Martin, the Asia Editor of social insights and content outfit Storyful; Al Jazeera English correspondent Jamela Alindogan; and digital and social media specialist Juned Sonido. Bayan Mo iPatrol Mo head Rowena Paraan helmed the discussions.

Key points surfaced by the panelists and moderator included addressing the term “fake news” as problematic because it falls well short of being able to encompass the complexity of the situation (which is why “disinformation” is a more appropriate term), as well as the urgent need to reach out to government agencies in order to make them understand the importance of supporting free speech and journalism, and how it is crucial to establish common definitions for concepts, such as what people refer to as “fake news” and “human rights.”

Session 5 took a deep dive into disinformation itself and tried to determine why it works so well. MediaNation head Bart Guingona guided the discussion, which was taken up by panelists Cherian George, Edson Tandoc of the Wee Kim Wee School of Communication and Information at the Nanyang Technological University in Singapore, and Sun Sun Lim of the Singapore University of Technology and Design.

The session introduced the term “the perfect storm,” in this context, is the heady combination of the sociocultural climate and the citizenry’s cognitive biases with a compliant technological landscape. The findings of a paper concerning disinformation and the consumers of this kind of news were also presented. Samples of some extremely effective disinformation campaigns (including the so-called “Love Jihad” in India) were also offered. The panelists also exhorted the audience not to underestimate the power and sophistication of disinformation campaigns.

The first day of the Conference was capped with a hotly anticipated final session on fundamental freedoms, which featured the participation of Peter Greste and Philippine Supreme Court Associate Justice Marvic Leonen.

A key topic of this session was the potential role the law could play when countering disinformation. Greste and Leonen also raised a crucial point: what happens in any society where the traditional guardians of truth, namely the journalists, the courts, the academic community, come under threat? They also touched on the cornerstone role of freedom of expression and how and why it must be respected.

The second and final day of the Democracy and Disinformation Conference kicked off with a session featuring former Department of Education Secretary Bro. Armin Luistro and Fr. Jett Villarin of the Ateneo de Manila, and with Cod Satrusayang of the Asia News Network moderating.

The session lamented the sore lack of online public spaces where meaningful conversation could take place, underscoring a need for good face to face encounters. It also brought up the fact that citizens are all responsible for the current shape and form of the society now, given that the people have allowed it to become what it is at present. The discussants also stated the need to look at how universities counter the effect of disinformation, and at how truth cannot be an abstract concept but must be a concrete, tangible reality in order that it be significant for people on the ground.

The day’s second session focused on the launch of a study entitled “Architects of Networked Disinformation: Behind the Scenes of Troll Accounts and Fake News Production in the Philippines,” conducted by Jonathan Corpus Ong and Jason Cabanes.

In a nutshell, said study identifies advertising and PR executives as the so-called “chief architects” of fake news production, and outlines strategies and motivations of political operators who have in advertising and PR, computer programming, and so on.

Free copies of the study may be downloaded here.

The last few sessions of the Conference focused on “fighting back,” with this particular one revolving around the first principles of doing so.

Panelists Cherian George, Clarissa David, Peter Greste, ABS-CBN news chief Ging Reyes, and veteran journalist Inday Espina Varona, along with moderator Cheryll Soriano, established, among other things, that people need to recognize that there has been a loss of trust in media and that trust must be regained; that journalists are forced to grapple with trolls, which saps the time, energy, and resources that they must devote to their craft; and that practitioners should never forget to remind people about the importance of journalism and why journalists do what they do.

Continuing the theme of “fighting back,” the next session was a venue for IT advocate and expert Carlos Nazareno, Citizen Safe’s Gang Badoy Capati, TV5 journalist Ed Lingao, PETA’s Beng Cabangon, and moderator Vince Lazatin of the Transparency and Accountability Network to share best practices in dealing with the flood of disinformation.

Some useful tips surfaced by the panel:

The panel also expressed disapproval of muzzling “noisy” bloggers because everyone has a right to speak; and also recommended thinking twice before taking one’s social networking account/s private, because engagement is crucial.

The assemblage then proceeded to attend a series of workshops of their choice before reconvening to share and listen to reports regarding the proceedings.

This session and a quick wrap-up concluded the Democracy and Disinformation Conference.

Are you following us on Twitter? Please check out our live-tweeted coverage of the Conference.

0 comments on “Fighting back ‘Fake News’: Highlights of the democracy and disinformation conference”